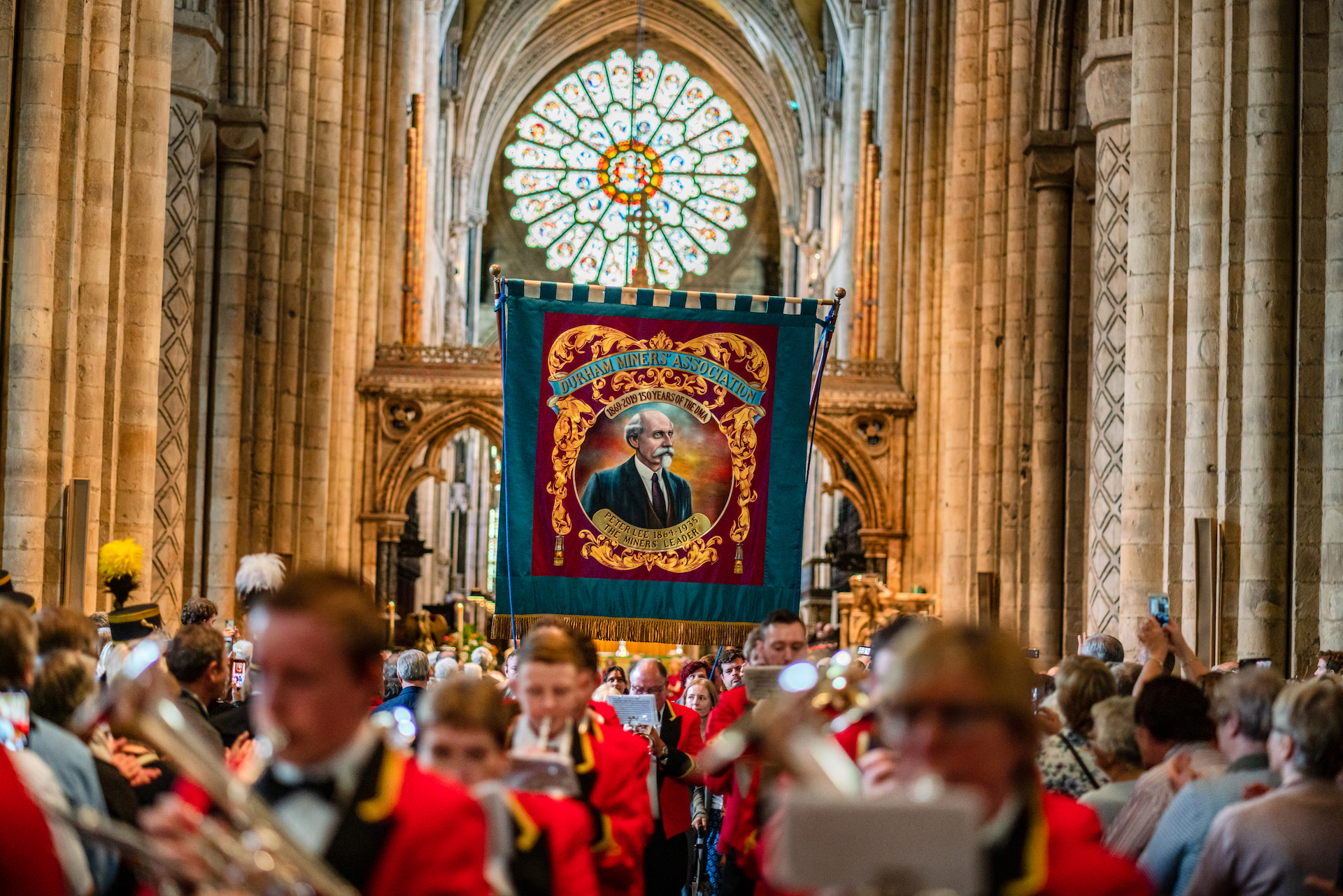 The 150th anniversary of the Durham Miners' Gala will be celebrated at a special service at Durham Cathedral.

Known as The Big Meeting, the annual celebration of community, solidarity and the coal mining heritage of County Durham was first held in 1871. The Miners Festival Service at Durham Cathedral has been part of every Gala since 1897.

The Gala itself was unable to take place in its 150th year due the Covid-19 pandemic.

A special evensong service on Friday 29 October at 5.30pm will honour the Gala and the communities that have sustained it for a century and a half.

Actor Charlie Hardwick will read a new poem celebrating the Gala and Matt Wrack, General Secretary of the Fire Brigades Union, will pay tribute to key workers at the service, which will feature performances from the Durham Miners Association Brass Band.

There will also be readings by the Bishop of Jarrow Sarah Clark, Dean of Durham Andrew Tremlett, Stephen Guy, Chair of the Durham Miners Association (DMA) and Chris McDonald, Chair of the Redhills charity.

Alan Mardghum, Secretary of the DMA, said: “We are very proud that this anniversary of will be celebrated in the wonderful Durham Cathedral.More than a generation on from the closure of the last colliery in Durham, the continuation of the Gala demonstrates that the principles of community and camaraderie at its heart are alive and relevant. The Gala is about the best of us – our desire to look out for each other and to join together to make a better world. It is a beacon of hope.”

The Gala has undergone a resurgence in recent years, with more than 200,000 people packing the streets of the city every second Saturday in July. The Miners Festival Service at Durham Cathedral remains a key part of the Gala, featuring the blessing of new miners banners, funded by coalfield communities. 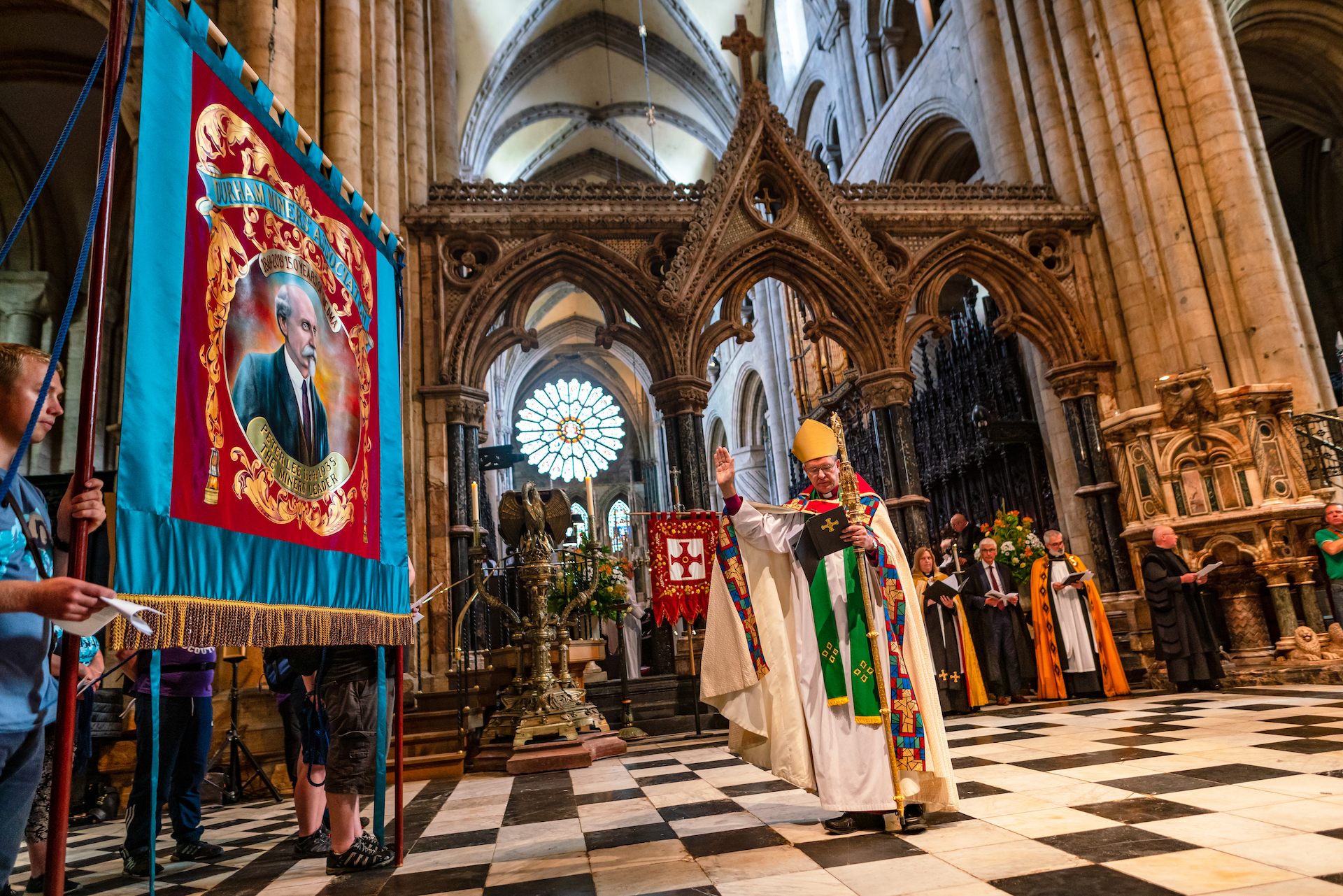 The Bishop of Durham, Paul Butler, blessing the DMA banner during the 2019 Miners Festival Service.

The Very Reverend Andrew Tremlett, Dean of Durham, said: "The Durham Miners’ Festival Service is a real highlight of the cathedral calendar, and although the Gala itself was unable to take place this year, we’re delighted to be hosting this special service to give thanks, reflect on the region’s mining legacy, as well as celebrate community cohesion and hope for the future."

In the interests of public safety, face coverings should be worn throughout the service, and people will be seated socially distanced in the Cathedral. Anyone with Covid-19 symptoms should not attend.

The first Gala was held in the amphitheatre at Wharton Park on 12 August 1871. Since then, there have been 135 Galas over 150 years. Before the Covid-19 pandemic, only two world wars and two national strikes had prevented the Gala taking place.

Following the cancellation of this year’s Gala, former mining communities stepped up to mark the anniversary arranging a series of ‘little big meetings’ bringing people together across the summer in the spirit of the Gala.

The Gala is due to return to the streets on Durham on Saturday 9 July 2022. Give the Gala your support. Join the Marras today: www.friendsofdurhamminersgala.org/join_us