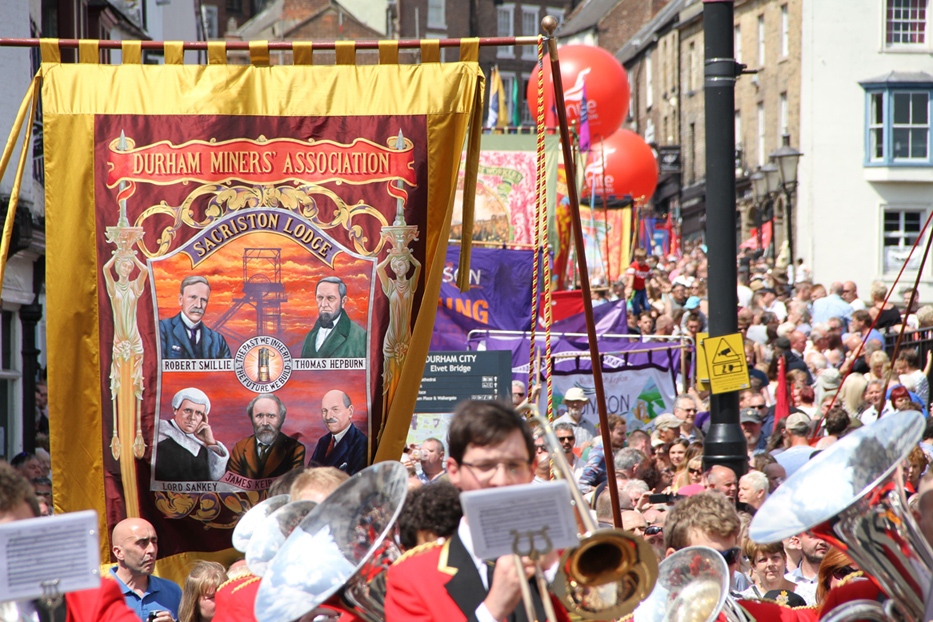 Reproduced from an article in the Daily Mirror by Jon Livesey, 11th July 2015 - You can view the original here

A staggering - and most likely record-breaking - 150,000 people paraded through a city centre as part of the annual Durham Miners' Gala this morning.

With the sun shining in the North East, by 8am the streets were lined with people waving and cheering ahead of the event, known as the Big Meeting.

As bands made their way to the Racecourse, mining banners from former collieries across the region were carried and displayed with pride.

Those represented included East Durham, Sunderland and South Tyneside, while unions, NASUWT and GMB, also put their colours on show.

The event was given a dash on added glamour by Turner Prize-winning transvestite, Grayson Perry, who was there as part of a documentary about masculinity.

He joined the march, walking with the Trimdon Grange Banner.

Durham Miners' Gala is the biggest trade union event in Europe, and this year it attracted factions from as far afield as Cuba and Venezuela.

Former Easington miner, Billy Huitson, 89, helped give the event an air of authenticity as he dressed as a pitman, entertaining the crowds with his singing and dancing.

As always, a traditional blessing of the banners service takes place in Durham Cathedral.

Click below to become a Friend for £2 per month