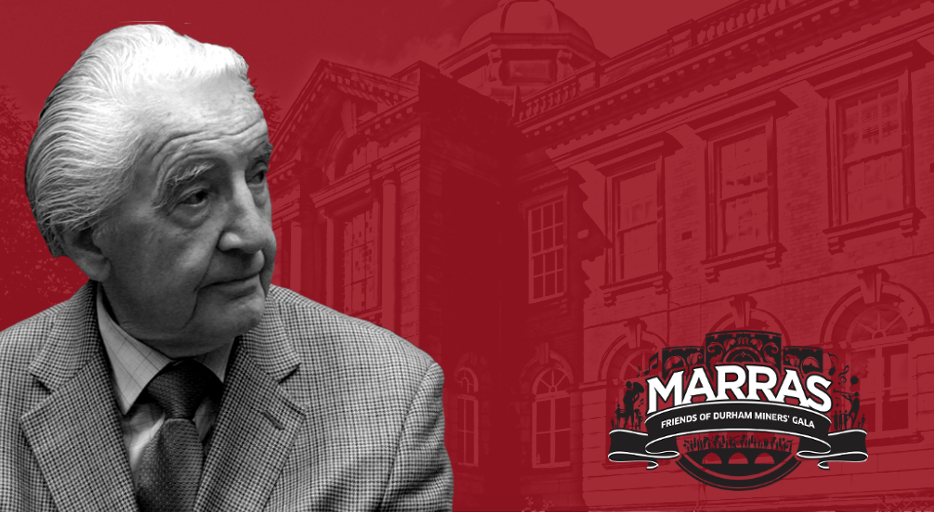 We're delighted to announce that legendary socialist politician Dennis Skinner is coming to Durham for a screening of a new film about his life and career.

The Bolsover MP will be at Redhills: The Miners’ Hall in Durham for a Q&A and screening of Nature of the Beast on Saturday, 2 December.

The veteran Labour MP will be joined at the event by the film’s director Daniel Draper. Proceeds will go to Marras – Friends of Durham Miners’ Gala, the organisation established to secure the future of the annual Big Meeting.

Grahame Morris MP, Chair of the Friends of the Gala, said: “We are delighted and proud that Dennis and Daniel are coming to Redhills for what will be a fantastic event. Dennis has been a great supporter of the Gala for decades. He’s always one of the most popular figures at the Big Meeting and has spoken from the platform on many occasions. Proceeds from the event will go to the Friends of the Gala to help fund the Big Meeting and secure its future. I encourage anyone who is not already a member to sign up today.”

Marras will be hosting events during the year and are introducing priority ticketing as a membership benefit. An allocation of tickets for the Dennis Skinner event will go on sale to initially to members of the Friends of Durham Miners’ Gala on Friday, October 20. Remaining tickets will then go on public sale on Friday, October 27.

Nature of the Beast is a cinematic portrait of the committed socialist and trade unionist who has fought for the rights of the working class for over half a century. The feature-length documentary by film company Shut Out The Light traces his rise to become a political icon, and reveals the man behind the 'Beast of Bolsover'.

Doors will open at 5.45pm on Saturday, December 2. The screening will begin at 6.30pm and will be followed by the Q&A.

All tickets for the event are priced £10. Friends of Durham Miners’ Gala will be sent an email to access the initial sale.

Tickets will then go on public sale at 10am on Friday, October 27 online at: http://buytickets.at/marrasfriendsofdurhamminersgala/121181

Tickets will also be available in person from: Redhills: The Miners’ Hall, Flass Street, Durham DH1 4BE and at The People’s Bookshop, 70 Saddler St, Saddlers Yard, Durham DH1 3NP.